As a photographer, and as a Belizean, I’ve always dreamed of having a single photo appear in    Destination Belize magazine, because of its worldwide reach. That dream came true in 2013, when two of my images of Prince Harry were published. But little did I know that a few years later, I’d have complete control of the magazine’s photography for its 20th edition. Being able to share my passion on an international platform is an incredible feeling.

After our Editorial Committee decided on the Roots and Rhythms theme, we brainstormed where and what we’d shoot to represent each aspect. It was no easy task with the multitude of options in Belize, from nature to historical sights, and music. But as a photographer, I reminded myself that honesty is key, and photos have to   reflect what truly interests you. I kept that in mind as I captured settings and activities around the country.

In the end, two final images stood out: the Maya fire ball game, representing roots, and the rhythms of the Belize Barrier Reef—unique with its corals visible from the coastline as waves crash over, echoing across a secluded landscape.

The fire ball game was captured at night with Sak Xikin (“the ocelots”), one of two Pok-ta-Pok teams from Yo Creek, Orange Walk. The game is a ritual they perform to honor the Maya sun god, Kinich Ahau. Fire is a key element, recognized as a source of life. I wanted to capture the dancing flames, to show the energy of the game. I followed running men throwing about a fire-lit hard rubber ball, and fell into the rhythm of their shouts. It was a true step back in time, which ultimately produced the final image.

Aerial photography of Half Moon Caye, on Lighthouse Reef Atoll, was the best way to show the incredible diversity in its landscape, from beach to reef. I wanted to show the caye’s natural crescent-shaped curve, pulling the eye into the scenery, and the vastness of the sea almost blending into the sky. Below, crashing waves move on an exposed reef, revealing Belize’s signature water with multiple blue hues.

Along with these memorable experiences came the inevitable Belize lessons: never forget your footwear lest you end up with burned soles, and never get too close to wildlife, or you and your camera might get a nice splattering of bird poop. 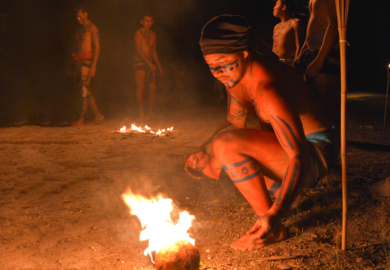