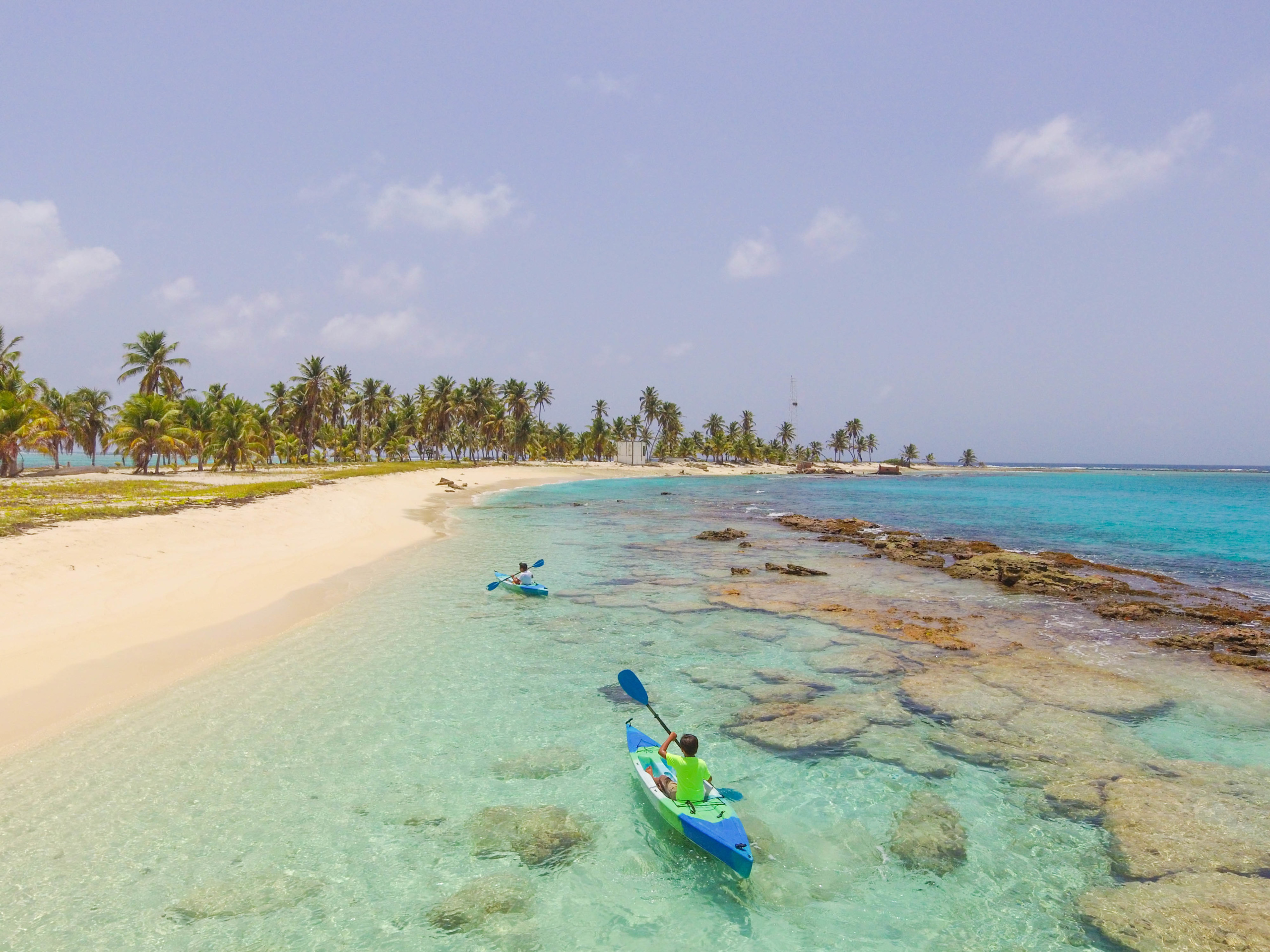 In October 2016, I received a phone call that brought my world to a standstill.

“Seismic ships are on their way,” said the voice on the other end.

The “saltwater” in my veins ran cold. My mind raced imagining apocalyptic scenarios. My heart said,“You have to stop them.”

My earliest and fondest childhood memories are of me in the Caribbean Sea: licking mango juice and salt water off my elbows in a St. George’s Caye crawl, counting shooting stars from Sister’s Point on South Water Caye, or hauling in snappers right off the beach on Glover’s Reef. But the call I’ve always rushed to answer is the sound of life underwater. The snap, crackle, pop of the sea is embryonic, drowning out the chaos above the waterline with a quieting peace. The beauty of being Belizean is that, while we all proudly proclaim that the second longest barrier reef in the world—in one breath no less—is part of our patrimony, each of us boast uniquely personal connections to the sea.

As a child, I was convinced my calling was to be a marine biologist. What was the story of the glowing water at the end of pier? How do hermit crabs sense a storm on the horizon? What do whale sharks see in the blue? I asked so many questions, I guess it was inevitable that I became a journalist. But in April 2010, I wasn’t the only Belizean asking, “What if that happened here?” Up until that point, few had contemplated an offshore oil industry in Belize. Then came the goose bumps at the revelation that companies were already approved to probe and drill Belize’s sea floor. The fact that concession maps covered everything, from our iconic Blue Hole to the entire reef, and all our marine protected areas, felt like salt in an open wound.

When I opened my mouth to advocate against offshore oil in Belizean waters, I was labeled “emotional.” I’m sure it was meant as an insult; I took it as a compliment. I knew what had happened with oil spills in other countries. I had to speak up no matter what they called me, because I know how important healthy coastal and marine resources are to Belizeans. The men, women and children who would be impacted weren’t a faceless population of strangers. A sixty percent national dependence on the sea means they’re friends, and family of family, neighbors, and peers. They’ve all invested blood, sweat, and tears in their tourism and fishing-based livelihoods. I shuddered at the possibility that younger Belizeans might never know the wonder of a vibrant sea. The lack of willingness from Belizean leaders to highlight just how irrevocably damaging the oil industry is, was hurtful. I couldn’t help but to stand up for Belize.

The strategy was to go door to door, town to town, and share as much information as possible with as many people as possible. An educated constituency is an empowered constituency. Early on, a government official called Oceana “sensationalists.” If saying no to offshore oil was sensationalist, then we were going to #beSensational to #SayNotoOffshoreOilBelize. Every day brought new uncertainties, because many decisions were being made behind closed doors. And yet we also found hope everywhere we went. In the face of old and new concession maps, Supreme Court declarations, and repeated political promises on news broadcasts, the adamance of Belizeans in remaining engaged and participatory in offshore oil decisions was as strong in San Ignacio and Orange Walk, as it was in San Pedro and Placencia. In a country where partisan politics and time side-line important issues, the campaign was fueled by the reality that Belizeans were united on this matter.

Yet moving in the shadows, a tireless, faceless advocate was pushing the Government to say “Yes!” to offshore oil. I came to dread the “private number” calls appearing on my cell. Two stood out. One screamed accusations at me, while the other told me I was “inciting violence” by encouraging Belizeans to stand up for what they believe in. I found safe harbor in my family, in my sensational team and colleagues, and in the scores of Belizeans who said, “Keep doing what you’re doing.” And I had the sea. I went back to her every chance I could, so she could wrap me in a loving embrace and wash away my fears.

A “policy-based” moratorium was in effect, but then without justification or explanation, much less the public’s knowledge or consent, seismic testing was approved. If the idea was to catch anyone “off-guard,” those airguns backfired. Seeing those ships on the horizon brought home the fact that the threat was real. Calls and messages from Belizeans tracking the vessels online lit up my phone. It was all hands on-deck—I gathered all the information, met with our lawyers, and joined other conservation colleagues bound for San Pedro, our number one tourism destination. When the official Government delegation arrived the following day, Belizeans from Caye Caulker, Hopkins, and Placencia had joined the San Pedranos.

That seismic data has a single purpose wasn’t lost on anyone; every slide in the PowerPoint presentation heightened the tension in the standing–room only venue. The crowd only wanted to hear that the ships were leaving Belizean waters. When an elected official promised to be the first one to jump if anything ever threatened the reef, they chanted, “Jump! Jump! Jump!” And to his credit, he did. Hours later, he jumped up on stage to announce the suspension of the studies. The ships were going home.

As I stood beside him, looking out into the sea of faces standing up to protect their Belize—fishermen, tour guides, hoteliers, chefs, and students—a torrent of emotions and gratitude came over me. Suddenly, I too, chanted their way: “Belize no just pretty, we pretty bad!”2

In truth, Belizean unity is even more beautiful. That day will always serve as an inspirational reminder that “people power” is strong enough to change the tide. In the aftermath, in December 2017, Belize became the first country in the world to implement an indefinite moratorium on offshore oil activities, aptly called “The People’s Law.” Our sensational Belizean people will ensure its longevity for generations to come.