At 12 years of age, Rowan Garel became the first visually impaired Belizean to reach the summit of Victoria Peak, the country’s second highest point. He later dove the Great Blue Hole. His adventures raised funds for the Belize Council for the Visually Impaired (BCVI). This year, Rowan received a Caribbean Adventure Ambassador of the Year Award from the Caribbean Tourism Organization.

As Told To Mike Rudon

MR: At what age did you begin exploring the outdoors, and what inspired you to start on this path?

RG: I was probably just months old because my father was extremely adventurous. He has explored Belize for years. He’s also a tour guide; he takes groups to Cockscomb Basin Wildlife Sanctuary and South Water Caye, and he would bring me on some of those trips. From day one, my family ensured that I was treated like a sighted person.

MR: Name your favorite adventure of all in Belize?

RG: Victoria Peak is my favorite because it’s where I was able to experience the wildest sights. I could hear and see birds, trees, lizards, and eagles.

MR: How did you achieve diving the Great Blue Hole?

RG: I had to get certified. It wasn’t that bad because I knew the instructor, who is a family friend. In complete honesty, when I put my face into the water and [my instructor] said breathe it in, I wanted to know if he was nuts because my face was in water and he said “inhale, you’re not the first to inhale under water.” That was the hard part, taking in that first breath.

The take away is that every individual is capable of doing what he or she puts her mind to. If you see a blind child, maybe at school, that person is not a blind human being—he or she is a human being who happens to be blind. We’re completely normal, and people shouldn’t be afraid to approach and converse with us.

MR: Tell us about your fundraising – how much was raised and what was achieved?

RG: I know it was over $100,000 Belize dollars. The most important accomplishment was raising awareness of services for the blind, and the need that exists in Belize. Most people associate the BCVI with the place you go for glasses, but they don’t realize that there’s a rehabilitation program providing services for blind and visually impaired people. That perception has changed hopefully. Two to three months after the Victoria Peak fundraiser, we saw new children at summer camp that had never registered with the BCVI simply because they didn’t know that these services were available. That’s definitely the most rewarding part—seeing parents bringing children all the way from Cayo, Stann Creek, and Toledo, and knowing our work has paid off.

MR: If you could go on an adventure with one of the world’s great explorers, past or present, who would it be?

RG: It would be Sir David Attenborough, who narrated many BBC nature documentaries. He’s a pioneer in making nature accessible to people. Most people in the 1940s and 1960s went to the zoo to see animals in unnatural conditions, and that’s all the nature they got. But these documentaries show animals in their natural habitats, behaving without human interference. It gives people an intimate understanding of the animal’s life, which helps in conserving them, and providing an area where they can continue to live for years.

RG: I enjoy watching films and television series, and one of my favorite series is the Big Bang Theory. Something interesting you probably want to know is there’s this feature called descriptive audio for shows and series. It fills the space between dialogues; if someone switches glasses with their partner, it says the two people switched glasses, and mentions their names. It really helps because if I watch an action film like X-men, with many fight scenes and less dialogue, I can follow what’s happening that way.

RG: I intend to keep exploring Belize—I’ve definitely not seen all our country has to offer. I haven’t been to Bladen Nature Reserve, or a number of the more remote cayes. I would also love to skydive; I’ve wanted to do that for a long time because rollercoasters are extremely enjoyable for me with the twists, turns, and the falling. Skydiving would be like the ultimate free–fall.

To learn more about the BCVI or contribute to their programs, please visit www.bcvi.org 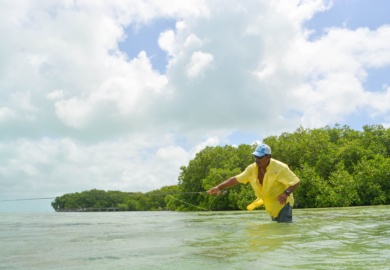 The Catch in Protected Status