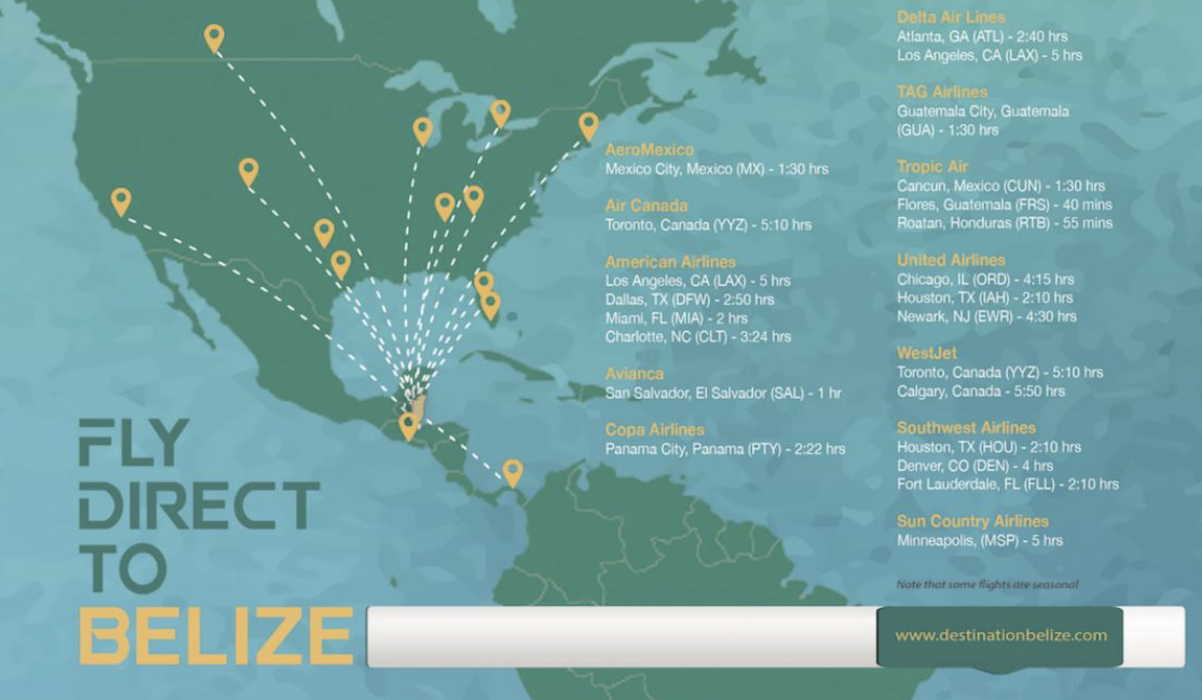 Pick your flight, pack, and go: getting here is easier than ever.

Flying to Belize from almost anywhere in the world is a simple and stress free experience. It’s almost as stress free as being in Belize. With nonstop flights from 17 cities in seven countries, on seven international airlines, getting here has never been easier or more cost effective. And from most North American cities, it takes between two and six hours to reach Belize City’s Philip Goldson International Airport (BZE), the sole port of entry for international flights.

Direct from the US, Canada, and Latin America

At the time of writing, non-stop flights between Europe or Asia and Belize are not available, but don’t let that deter you. Connections from other parts of the world are made possible via the mega hubs of Los Angeles, Miami, Houston, Atlanta, Dallas, New York, Toronto, Panama, and Cancún.

Airfare pricing is never fixed, but depends on demand and on the season. The highest prices are usually on weekends, and around the holiday periods of Thanksgiving, Christmas, and Easter. The months of February, March, June, and July also see higher fares, especially if you book within 14 days of your departure, or on Saturdays.

You’ll get the best prices if you book early, 60 to 90 days out, or travel during the off peak periods in April and May, and from August to November. The low demand periods in early December and mid January can also offer excellent value, as can timing travel to coincide with the middle of the week.

Sometimes the absolute best deals are found if you’re willing to take a more circuitous route (for example, traveling to Belize via Panama). European visitors, too, often find using that Cancún as their connecting point to Belize offers excellent value due to the large number of flight options and long haul low cost carriers serving that city (such as Condor and Thomas Cook).

Once in Belize, most visitors hop on a domestic flight to get to their resort or vacation spot. Tropic Air flies to 11 destinations within Belize, while Maya Island Air flies to nine. The busiest route for both carriers is Ambergris Caye, with flights approximately every 15 minutes at peak times. Tropic Air also offers flights to the western part of the country and to the nation’s capital, Belmopan.

With all the Belize adventure-planning waiting for you, getting here is the last thing you’ll have to worry about.